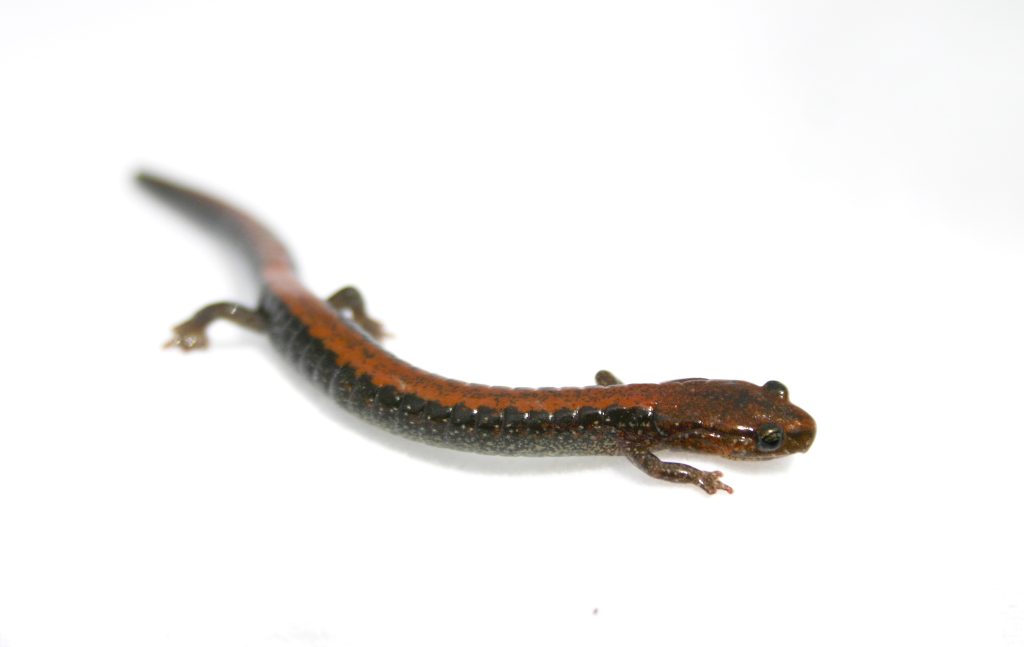 Amphibians – like other cold-blooded animals – endure the harshest winter conditions without an internal source of body heat. They have evolved some extraordinary mechanisms to survive. Amphibians brumate over the winter months. Similar to hibernation, brumating animals slow their metabolism and allow their body temperature to drop. Although the Biosphere’s amphibians all face similar winter conditions, they have distinct strategies to solve the same problem. Let’s explore some behaviours that have emerged in the amphibian world, while we all enjoy our warm-blooded comforts.

The red-backed salamander (Plethodon cinereus) is one of the most abundant amphibians in the Biosphere’s forests. This tiny salamander only reaches about 10cm in length, spending its entire life munching on invertebrates on the forest floor or your backyard’s firewood pile.

Like most other salamanders, the red-backed salamander survives the winter by avoiding extreme temperatures altogether. How do they do this? By burrowing in the ground! The ground stays much warmer than the air in winter months. Freezing temperatures usually only reach a certain depth in the soil, referred to as the frost line. Engineers, architects, and construction crews have to consider the frost line to make sure that pipes don’t freeze, and that the foundations of structures don’t shift as the frozen soil expands and contracts with the changing seasons. For burrowing amphibians that cannot tolerate freezing temperatures, being below the frost line is a matter of life and death.

In the Biosphere region, the frost line can reach down to 1.8m below the surface of exposed ground. However, in areas with a thick blanket of insulating snow and decaying vegetation, that depth is significantly reduced. Other burrowing amphibians like the American toad (Anaxyrus americanus) are well-adapted tunnelers, and will often dig more than 50cm down into the soil to avoid the frost. The red-backed salamander, however, has a dainty frame that makes digging much more difficult.

The solution? Have someone else do the excavation work. Although some red-backed salamanders manage to reach below the frost line on their own, many others use the burrows of other animals to find refuge. Red-backed salamanders use anthills, rodent tunnels, and sometimes even our basements to escape the frost.

Champions of surviving winter temperatures, wood frogs (Lithobates sylvaticus) are found not only in the Biosphere, but as far north as the Arctic Circle. Wood frogs have a rare combination of freeze avoidance and freeze tolerance adaptations, which allow them to face the season head-on.

The first part of the wood frog playbook involves a freeze avoidance strategy. Freeze avoidance adaptations prevent tissues from freezing altogether, even when temperatures dip below zero. To protect vital tissues, wood frogs are able to combine several chemicals to lower the freezing point in their cells. Stockpiling glycerol (fat), glucose (sugar), and urea (urine) inside of the cell membrane allows the liquid inside to drop well below zero without freezing.

The second adaptation is freeze tolerance. Animals who are freeze tolerant are able to form ice crystals within their body without causing damage to tissues. Wood frogs produce antifreeze proteins, which attach to ice crystals in the space between cells. Instead of forming large, continuous crystals that would tear through cell membranes, smaller, controlled crystals are formed.

This combination of adaptations allows wood frogs to freeze solid – with up to 70% of their bodies turned into ice. The frog’s heart stops, and they can remain in this zombie-like state for up to eight months! Once spring comes, the wood frog simply thaws out, regaining its circulatory system, metabolic system, and lastly, motor function.

The common mudpuppy (Necturus maculosus) defies the trends of all other Biosphere amphibians, and skips brumation altogether. The mudpuppy is the only local amphibian that remains active during the winter. In fact, winter is the season when you are most likely to see mudpuppies, often being found by unsuspecting ice fishers.

Mudpuppies are Ontario’s only fully aquatic salamander. Unlike their semi-aquatic and terrestrial counterparts, mudpuppies spend their entire lives in the water, using large exposed gills to breathe. By occupying large lakes and flowing rivers, mudpuppies can take refuge in water bodies that won’t freeze solid.

Aquatic frogs like northern leopard frogs (Lithobates pipiens) and green frogs (Lithobates clamitans) also take advantage of the relatively well-insulated wetlands, but they burrow themselves into the mud and brumate during the winter. So why don’t mudpuppies?

It’s not entirely clear why mudpuppies are able to remain active while their distant cousins cannot. One reason might be that they are still able to find their main sources of food during the winter months. Mudpuppies eat crayfish, small fish, and a variety of other aquatic organisms. It may also serve as a way to avoid predators, since large fish eat less during the winter months.

Have you ever caught a mudpuppy while ice fishing? Next time, report your sighting to GBB’s iNaturalist project! Read more about mudpuppies and ice fishing HERE.