Since the Industrial Revolution, when we began burning coal and then oil, people have been changing the planet’s climate. Burning fossil fuels, as well as clearing land for agriculture, industry and other human activities, has increased the carbon dioxide (CO2) in the atmosphere, raising the global temperature. Incredibly, CO2 levels have gone from 280 parts per million to 400 parts per million in the last 150 years. When you add in methane and nitrous oxide, both of which increase the greenhouse effect, our civilization has raised the temperature of planet earth in just 50 years.

Since the last ice age, or glacial period, the global climate has slowly warmed to create a stable, optimum environment for life on earth. The global temperature—and the regional weather patterns we know—have been regulated by a stable atmosphere and a carbon cycle that works with forests, oceans and the cooling Arctic and Antarctic poles.

For the past 150 years of human activity, the earth’s atmosphere has had to absorb more CO2 and other gases—and now we are seeing the effects. As these gases accumulate in the atmosphere, more sunlight and heat are absorbed, increasing the overall global temperature and changing the climate that previous generations have known. With an increase of just 2°C in global temperature, we now see Arctic ice and glaciers melting at unprecedented rates, sea levels rising and flooding coastal areas, and more frequent and more extreme weather events.

Scientists around the world agree that climate change is occurring, that human activity is the cause and that we must act quickly if we are going to slow the warming of the earth.

Unfortunately, global temperatures accelerate every decade because of “positive feedbacks.” For example, as global temperatures rise, polar ice melts, shrinking the white reflective area and expanding the dark surface area (of oceans, lakes and land) that absorbs the sun’s rays. Instead of a slow, progressive warming, it is exponential, with every decade warming faster than the previous one.

Catastrophic events, such as drought, food and water shortages, disease, refugee crises and war, are all likely scenarios if human activities continue at current rates of carbon emissions.

By looking at ice cover data for Georgian Bay, we can see a warming trend in our region.

The Canadian Ice Service has been recording water temperature and ice cover weekly since 1973. Similarly, weather stations, buoy monitoring and research labs combine to collect data across the Great Lakes to measure the impacts of climate change.

A variety of techniques are used to track changes in ice cover: lake levels and water-movement patterns, real-time satellite observations, maximum and average ice thickness and duration of ice cover.

You may live near a water body and also notice when the ice forms in the fall and melts in the spring—known as “ice on/off dates.” If ice on/off is recorded over decades, climate trends may be seen.

Notice that there is considerable variation in ice cover from year to year; this is common for most climate-related data. Despite colder and warmer years, there is a clear long-term warming trend.

Severn Sound Is Warming Up

Severn Sound Environmental Association has reviewed its climate change indicators: water and air temperature, timing of ice on/off, stream thermal stability, rainfall amount and intensity, and stream flow. Some indicators have been measured for over 100 years. Here’s what they found:

Climate plays a vital role in Georgian Bay’s environment and ecosystems. Global temperatures, regional climate and local weather affect the physical and biological condition of our region and determine which species can live here and how we may need to adapt to changing conditions.

Ice cover and water temperatures are not the only things affected by climate change. There are many other impacts that can be seen, from those on land and water to those in our communities and around the world. The habitats we know—wetlands, forests, rivers—and the systems we depend on, such as food, water and infrastructure, are all vulnerable to climate change. It is important that we understand these threats and start to adapt and build resilience for a future of global warming.

In 2017, Quebec and eastern Ontario were hit by spring storms, at one point receiving a record 155 millimetres of rain in 24 hours. The floods caused an estimated $226 million of insured damage, with an unknown amount of additional damage to homeowners and government infrastructure. Due to climate change, weather events like these are becoming more frequent and more severe.

Protecting large, connected habitats and natural areas will buffer some of the effects of extreme weather and assist species migration as the planet warms. Conserving ecosystems will help protect biodiversity.

Human innovation, technology and simpler living will reduce our greenhouse gas emissions while governments implement good policies and incentives for industry to invest in slowing climate change for future generations. We have to act now as citizens, communities, businesses and governments.

Georgian Bay, too, is warming; the Bay’s food web is collapsing; and pests and invasive species are on the rise. With each passing decade, we make the ecosystems upon which we depend more vulnerable. Isn’t it time we stopped putting so much carbon into our own atmosphere?

We can help solve this global problem from getting worse. There are many ways we can each reduce our carbon footprint, saving energy and money, and reducing impacts on future generations. How many do you do?

Check Out the Climate Atlas

The Climate Atlas of Canada is an interactive tool that citizens, researchers, businesses and community and political leaders can use to learn about climate change in Canada. Launched in April 2018, it combines climate science, mapping, videography and storytelling to bring the global issue of climate change closer to home. It is also designed to inspire local, regional and national action and solutions.

Citizens are encouraged to learn about ways to make their homes and properties more resilient to the potential impacts of climate change, such as severe weather, flooding and drought. This also means ensuring that properties are protected by the right insurance.

Shoreline properties can be particularly susceptible to changing water levels and storms, and shoreline owners are encouraged to maintain a natural shoreline with native plants and shrubs, which are better able to withstand wave action over the long term. 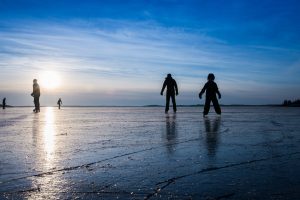 The most powerful computers on earth are used to run climate models. Scientists use these models to understand how earth’s climate works and to make predictions about how it might change in the future.

Climate models have helped reconstruct climates of the distant and recent past, providing important information, such as the causes of the last ice age. The proven ability of climate models to describe earth’s past and present climates gives us confidence that they can simulate the planet’s future climate, too.

There are many research centres and thousands of climate scientists creating and fine-tuning computerized climate models worldwide. For example, England’s Met Office Hadley Centre for Climate Science and Services is one of the world’s leading climate research institutions. It has over 200 staff dedicated to climate research and uses clusters of supercomputers to create some of the most effective climate models in the world. Here in Canada, the federal Canadian Centre for Climate Modelling and Analysis has been creating excellent climate models since the early 1980s.

Climate scientists at institutions like the Hadley Centre and the Canadian Centre for Climate Modelling and Analysis combine scientific research and advanced computing to predict what the climate will look like in the decades to come. – Excerpted from climateatlas.ca

The climate atlas shows data for each community in Canada. It uses recorded data from 1976 to 2005 and takes current trends and extends them into the future to create a scenario of temperature, precipitation, frost dates and more for a specific place. This is powerful data combined from hundreds of sources to project likely areas of drought, heat waves and other potential climate impacts in Canada.

For example, the atlas reports on the average number of “icing days” each year, on which the air temperature does not go above freezing (0°C). Parry Sound had an average of 76.5 icing days per year from 1976 to 2005.

Assuming that carbon emissions continue at current rates, a likely scenario for the immediate future (2021 to 2050) is that Parry Sound only has 55.8 icing days each year, on average, and fewer than 40 icing days after the year 2050.

Warmer winters have implications for ecosystems, winter hibernation of species, ice travel and safety, winter tourism and recreation. Without the protection of ice cover, for example, whitefish eggs can be harmed by wave action. Earlier thaws may lead to earlier algal blooms and more algae growth overall. Fewer days of very cold temperatures can also result in a lack of natural control for certain pests and insects, resulting in more frequent and severe outbreaks of conditions such as Lyme disease and West Nile virus.

The climate atlas also shows the average number of very hot days for Parry Sound increasing from only about two per year from 1976 to 2005 to over 10 per year in the next few decades. More frequent heat waves have implications for human health, particularly for children and seniors.

In addition, the climate atlas also suggests that summers could be very hot, on average, causing droughts, groundwater shortages, crop failure and increased food costs. Drought can leave forests vulnerable to pest outbreaks and increase the risk of forest fires.

Preparing for the Impacts of Climate Change

The Muskoka Watershed Council created a unique report using the best available science to help predict the future climate of the Muskoka region. It examines the likely impacts of a mid-century climate on our lakes and waterways, forests, community infrastructure and way of life. These include precipitation and drought patterns, record-high summer temperatures, extreme weather events, water quality and stormwater management and other infrastructure-related issues. The report calls for prompt action by provincial agencies, district and municipal governments, local businesses, community groups and individual citizens.

While there will be a number of negative impacts on our environment and in our lives, we have sufficient scientific understanding of the causes and processes involved, plus the necessary skills to plan for, and implement, adaptive responses that will help us minimize and manage these impacts. With community-wide commitment to planning and timely action, we should be able to adapt effectively. Climate change is here, and we must act to manage the impacts responsibly.

Go to muskokawatershed.org to learn more. 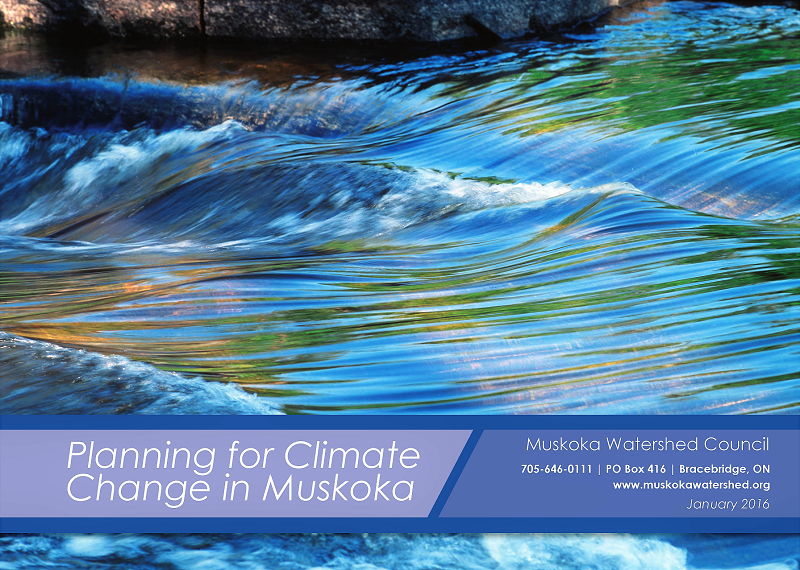 Next Chapter: Kids in the Biosphere