Eastern Georgian Bay is a huge freshwater archipelago—or a collection of islands—along a complex shoreline. The region contains a large number of pristine wetlands with a high biodiversity of plants and animals.

Our coastal wetlands are especially important in the Great Lakes because the majority of shoreline wetlands have been lost due to human impacts. They have been filled in, dredged up and converted to other land uses. Invasive species, such as phragmites (common reed) can completely replace native vegetation, destroying wetland habitat and its ecological functions.

Fortunately, Georgian Bay still contains high-quality wetlands distributed along most of its shorelines that are relatively protected from roads and human development. However, wetlands still face the threat of human impact from shoreline modifications, increased run off and sediment, water withdrawals and invasive species.

Why is it Important?

Georgian Bay’s coastal wetlands are essential for a healthy environment. Wetlands support high numbers of birds, fish, reptiles, amphibians, insects and land-based animals that feed in marshes. You may have noticed that wetlands near you support ducks and other waterfowl, especially during spring and fall migration, and that they are home to an abundance of different types of fish.

A study of northern pike found that they use several wetlands over relatively large areas. Although the pike were young and small (less than 60 centimetres), they were moving between wetlands up to 4 kilometres apart.

Patches of small coastal wetlands work together to provide critical habitat for breeding amphibians, colonies of birds, like the great blue heron, and feeding grounds for the endangered massasauga rattlesnake and eastern foxsnake.

Coastal marshes provide nesting, resting and feeding places for hundreds of thousands of migratory and nesting birdlife, including at least 30 species of shorebirds, 27 species of ducks, geese and swans and several species of terns and gulls… Fifty-nine species of fish are found in coastal wetlands, and approximately 80% of all fish species depend on wetlands for some part of their life cycle.

Not only are coastal wetlands important habitat for a variety of fish and wildlife, but they contain some of the highest plant diversity, too. Marshes may contain floating vegetation, aquatic plants, meadow plants and shrubs—and they may look very different from one year to the next.

One reason that coastal marshes contain so many different plants is that they are subject to changes in water levels. Periodic flooding changes the plant composition, brings in new nutrients and expands the total area of wetland, while periodic drought supports more meadow species and even the arrival of shrubs and the establishment of young trees.

The scientific term for alternating high and low water levels in wetlands is “dynamic hydrological gradient,” meaning that the vegetation zones in coastal wetlands go from fully submerged to dry upland areas, creating patches of wetlands that may contain hundreds of plant species. It is important to recognize that lake levels naturally influence coastal wetlands, and there are species that benefit when water levels are higher and others that thrive during dry periods, where the water levels have dropped.

Patterns of water-level change are the driving force that determines the overall diversity and condition of wetland plant communities and the habitats they provide for a multitude of invertebrates, amphibians, reptiles, fish, birds and mammals.

Measuring the percentage of wetlands helps us observe how coastal wetlands naturally change with fluctuating water levels. Another term for this is “wetland cover,” and it can be best determined with satellite imagery.

In 2015, a project was designed to monitor changes in wetland extent, due to decreasing lake levels and climate change. The Ontario Ministry of the Environment and Climate Change, the Great Lakes St. Lawrence Cities Initiative and Georgian Bay Forever partnered with NASA to create wetland maps of Lake Ontario and Georgian Bay using satellite imagery.

Imagery for Georgian Bay was from July 1987 and June 2013, provided by the United States Geological Service. These years were selected based on historically high (1987) and low (2013) water levels.

What are the Results?

Although the net loss of 3.8% may not appear significant, net loss (or gain) is not a very useful measure at the scale of Georgian Bay. It is the local results that matter most. The loss or gain of wetlands will affect vegetation types, habitat availability for species and the other values of wetlands (such as flood mitigation) that people don’t always appreciate.

People often wonder where the fish that they historically remember in their area have gone. For southern Georgian Bay, the 10.8% loss is significant for the economic and ecosystems services that wetlands provide for that area.

From this study, we have a tool that tracks changes in wetland extent in relation to fluctuating water levels. The methods developed for this project provide a cost-effective solution to track long-term land-cover changes over large areas by using NASA earth observations.

Habitat preferences of marsh birds and amphibians are of particular interest to researchers, wetland managers and naturalists. MMP participants provide habitat descriptions at their survey stations in addition to recording species observations. As a result, wetland management and conservation strategies can be established to benefit a wide range of marsh-dependent species.

Eastern Georgian Bay currently has six active MMP stations and ideally would have more. If you can help, please visit birdscanada.org

Invasive species are spreading quickly, and you can report their location (including insects, plants and aquatic species) using the Early Detection and Distribution Mapping System (or EDDMapS). You can submit invasive-species sightings using either a smartphone or a computer. Sightings are uploaded to EDDMapS and emailed directly to reviewers to confirm. The maps and information are freely available to scientists, resource managers and the public. Having good data on invasive species locations improves our ability to manage and respond to them.

As of May 2018, EDDMapS contains more than 3.3 million records, and 38,890 of these are from Ontario. Download the app and/or register online at eddmaps.org

Invasive phragmites (pronounced frag-mite-eez) are a significant threat to the health of coastal wetlands. Phragmites are a non-native species from Europe that aggressively outcompetes native plants and reduces habitat. You may have seen phragmites growing along roadways—the feathery reed that towers over cattails. This invasive species spreads very easily, as their seeds and broken bits of rhizomes (roots) are carried by water, wind and heavy equipment, such as that used in highway construction. They grow into very dense monoculture “walls” that have as many as 200 stems per square metre and can be over 4.5 metres (15 feet) tall.

Georgian Bay Forever trains volunteers on how to report, cut and manage phragmites. They have helped over 30 community groups remove 48,750 kilograms (107,475 pounds) of phragmites from Georgian Bay shorelines.

Go to georgianbayforever.org to learn more about this invasive plant and how to help. 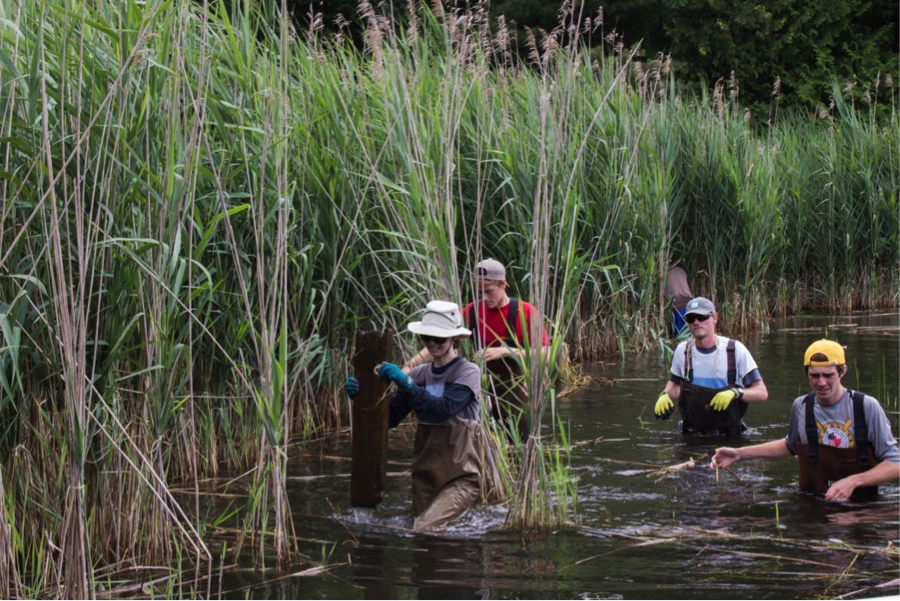 Next Chapter: Species at Risk