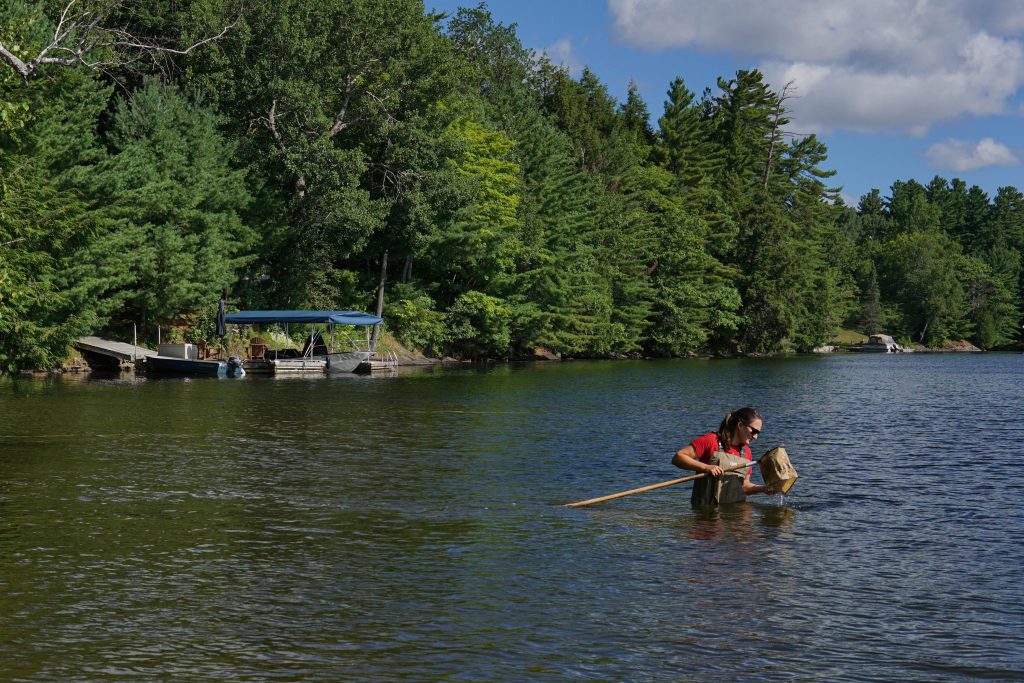 You see them everywhere. Dragonflies landing on fingers, mosquitoes buzzing in ears, moths swarming porch lights, and beetles crawling up legs. You can’t step foot anywhere in the Georgian Bay Biosphere during the summer without seeing or hearing an insect. What may surprise you is that this is also true for the water! Every time you go for a swim you are among the bugs. But rather than the bugs of the sky or the bugs of the grass, these are the bugs of the mud, the benthic macroinvertebrates.

Benthic macroinvertebrates are small aquatic insects such as crustaceans, worms, and mollusks that live part or all of their lives in the water and sediment in lakes, rivers, and wetlands. Many of the bugs we recognize flying and crawling around us begin their lives in the water, such as dragonflies which have an aquatic larval stage. While these critters may be small, they play a big role in the aquatic ecosystem. Not only do they play a critical role in nutrient cycling by eating dead and decaying material such as leaves and algae, they are also an important food source for many fish.

Why do we Monitor Benthic Macroinvertebrates?

Scientists can use benthic macroinvertebrates, or benthos, to learn about the health and biodiversity of an aquatic ecosystem. Following the standardized Ontario Benthos Biomonitoring Network or OBBN protocol, samples are collected from waterbodies and the invertebrates are inventoried to provide insight on the aquatic ecosystem’s condition.

Different invertebrates have varying tolerances to water quality conditions. Some groups of invertebrates are unable to live in lower quality water. This may include waterbodies with low oxygen levels, high amounts of pollution, and/or constant environmental disruption. Tolerant species are more resilient to disruptions in their habitat. They can thrive even in waterbodies with low oxygen levels and/or nutrient pollution, environments where sensitive invertebrates would not survive. These types of environments exhibit less diversity than a waterbody that can support both sensitive and tolerant species.

Benthic monitoring has become quite popular in recent years with its ability to give researchers insights into water pollution, habitat change, and other stressors that may be affecting the environment.

How to Sample for Benthic Macroinvertebrates

The Ontario Benthos Biomonitoring Network has a standardized protocol for sampling benthic macroinvertebrates that allows data to be compared across waterbodies and over time. For lakes, the travelling kick-and-sweep method is used to collect samples. This method involves kicking at the substrate to dislodge rocks, mud, and debris while sweeping a mesh net back and forth through the water to catch any invertebrates that have come loose. Sampling starts from a depth of 1m and goes right up to the water’s edge at the shore. The collected material is dumped into a bucket for processing. This process is repeated two more times within the same general area for a total of three separate samples, called replicates.

Sampling can happen any time of year, but the invertebrates found and their numbers will vary by season. As waters warm throughout the spring and summer months, many benthos transition to their terrestrial life stages, including blackflies, mosquitoes, dragonflies, deerflies, and horseflies. Oxygen levels also start to decrease as the water temperature rises, limiting invertebrate diversity. During fall and winter, the water temperature decreases while oxygen levels increase. At this time of year there is a higher chance of finding more sensitive invertebrates. Due to these seasonal differences, when benthic data is collected for comparison across years, it should be collected at the same time of year to ensure an accurate comparison.

The Georgian Bay Biosphere has partnered with Seguin Township, Township of The Archipelago, Township of McKellar, the Municipality of Whitestone, and Otter Lake Ratepayers’ Association to conduct benthic monitoring on inland lakes throughout the biosphere region.

Monitoring started in some area lakes as early as 2018. With three or more years of data for a number of lakes, we are now able to start analyzing the results across years and comparing the benthic communities in lakes throughout the Parry Sound-Muskoka area. Results from annual monitoring in the biosphere are found in township environment reports.

In addition to providing important information about the health of area lakes, benthic monitoring is also a great opportunity for our summer staff to get out on the water and inform residents and cottagers about the vital role of benthic macroinvertebrates in the aquatic ecosystem.

Want to explore the biosphere’s bugs in the mud? Grab yourself a sturdy net with a fine mesh size (bug nets are great for this!) and go searching for a shallow spot with lots of living and decomposing vegetation, woody debris, and small rocks. Throw on a pair of water shoes (be careful not to lose them in the mud!) or waders, head out as deep as your net will allow (you want to make sure it can still touch the bottom), and kick up the substrate as you walk backwards towards shore. Sweep your net through the water behind you, pour the collected contents into a bucket, and get ready to watch the bugs scurry around!

See if you can find some of these cool and common benthic macroinvertebrates in your sample. Try submitting a sighting to GBB’s iNaturalist project!