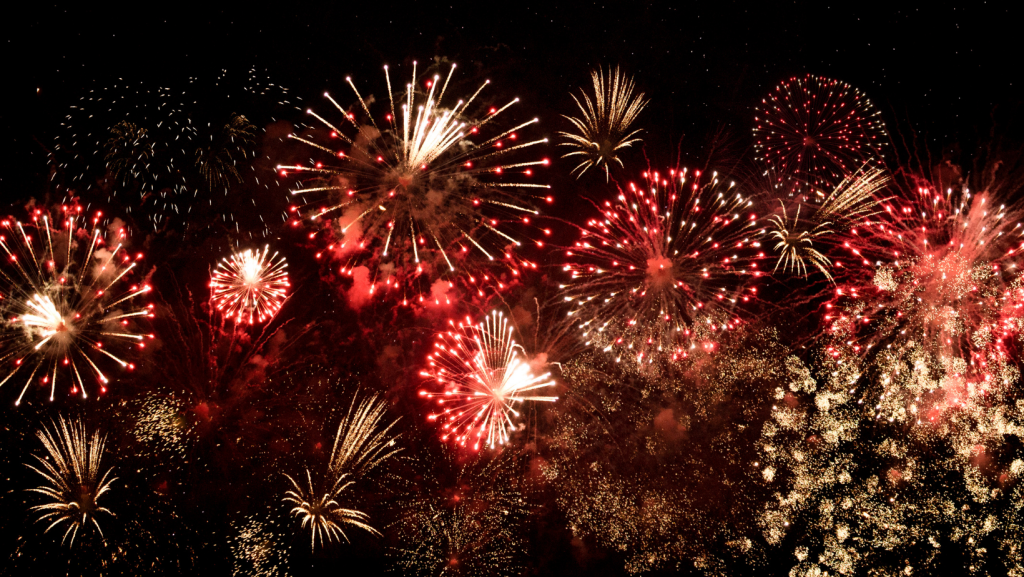 You never forget a great fireworks display. You might have been quite young, sitting on the shoulders of a loved one, looking up towards the stars, and then suddenly those stars were gone, replaced by bright lights and brilliant colours. As summer in the biosphere unfolds, plans are being made for summer celebrations. This may involve designing a fireworks display to wow community, friends, and family. What many people might not plan for are the impacts that fireworks can have on the air, land, water, and wildlife nearby.

What happens when you set off a firework?

When someone sets off a firework, a bursting charge releases “stars” — small colourant pellets formed from fuel and metallic components that create the bright colours lighting up the night sky. While most of the colourant pellets and propellant will burn up during the display, the combustion produces large smoke clouds, a form of atmospheric pollution. This pollution can be harmful to human health — specifically to those suffering from asthma. While more research needs to be conducted to get a better understanding of the respiratory harm fireworks can have, severe cases of asthma have been reported with firework displays as the cause.

Atmospheric pollution from firework displays can also be harmful to the environment. Carbon dioxide, a known greenhouse gas, is one of the chemicals released during the burning of fireworks. As a greenhouse gas, carbon dioxide plays a role in climate change, with impacts felt in the biosphere and beyond.

In addition to atmospheric pollution, the metallic and chemical components from  fireworks which are not burned during the display may fall to the ground and be carried with runoff water into Georgian Bay and its tributaries. This can pose a risk to water quality and wildlife. A study conducted following July 4th firework displays in the United States found that within 14 hours of displays, perchlorate (the term for the chemical compound used in the propellant for fireworks) concentrations in a nearby lake were 24 to 1,820 times greater than baseline values. Why should we care? High levels of perchlorate have been linked to disruptions in thyroid functioning  — a critical gland to metabolism and growth — in humans and wildlife. While perchlorate levels in crops and drinking water across North America are low, continuing to protect the health of the land, water, wildlife, and people is a top priority.

Furthermore, fireworks are often set off over bodies of water to reduce the risk of causing a fire on land. This typically results in firework debris ending up in the water, including charred fuses, bits of plastic, and pieces of cardboard. This debris washes up on shore or eventually sinks to the bottom of the lake, littering the environment in either case. Fireworks have also been linked to increased stress on wildlife in the region. The loud noises which accompany fireworks can cause wildlife in the vicinity to flee or abandon nests, dens, and safe areas, putting them and their young at risk. Birds have been known to flee their nests, knocking out eggs in the process and deer have run onto roads following the light and noise from fireworks. Firework displays have also been linked to the destruction of nests and dens, and can pose an increased risk for the onset of forest fires in rural areas particularly during dry conditions.

What are the alternatives?

As you are planning your celebrations this summer, think about replacing your fireworks with more environmentally friendly alternatives to help reduce the impact traditional fireworks have on the environment. Alternatives include:

If you do choose to celebrate special occasions this summer with fireworks, choose to attend a display organized by your township or municipality rather than hosting one yourself. This will help reduce the number of firework displays being held across the region, limiting the impact on air, land, water, and wildlife. If you can’t make it to your locally organized fireworks display but still want to light up the sky, plan your display in ways that will have the smallest impact on the surrounding wildlife. This may involve hosting your firework display away from trees, birdhouses, or other known wildlife habitats/nesting areas. Better yet, let the real stars put on a show and enjoy the sounds of nature!

Erika Kolli is a species at risk technician with the Georgian Bay Biosphere this summer. As a recent graduate of the School of Environment, Resources and Sustainability at the University of Waterloo she has a strong desire to conserve Georgian Bay and all its biodiversity.