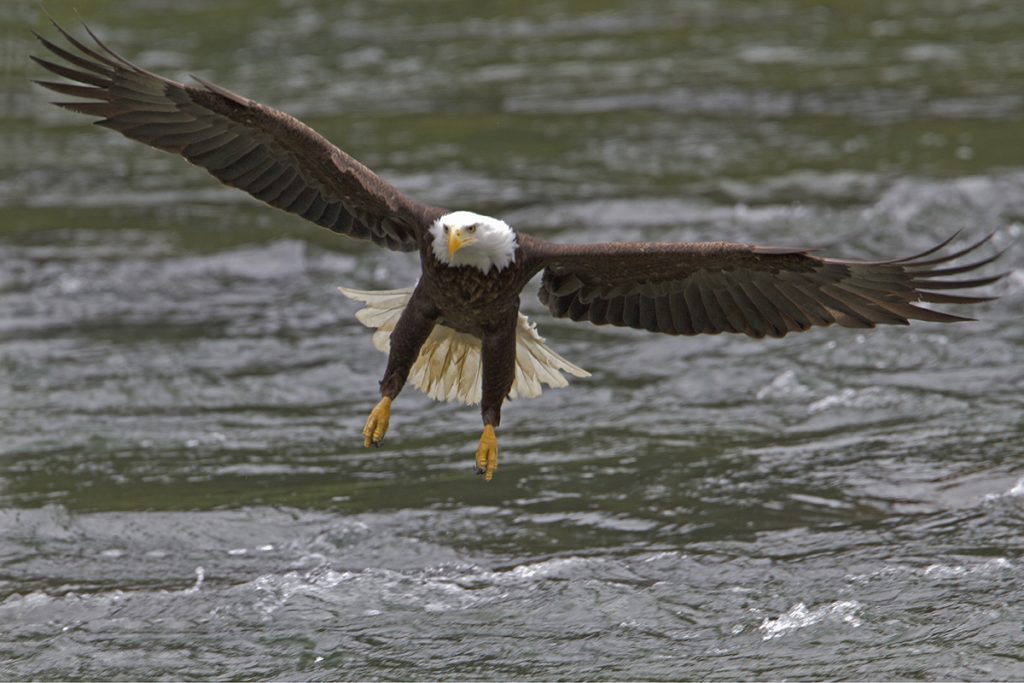 Many of us love hearing the call of a loon or seeing a majestic bald eagle. These species are the top of the food chain, relying on a healthy diet of fish. But what feeds the fish that they eat?

Scientists are researching what they call “the lower food web” in Georgian Bay, and we can learn a lot about the health of our environment by studying the food web and how it is doing. Almost every species of fish consumes smaller fish or a variety of zooplankton and small organisms that we rarely think about.

At the lowest level of the food web, there are the producers. These include algae and microscopic plants that use nutrients like phosphorus, and turn sunlight into chlorophyll to grow. However, as nutrients in the water decrease, their levels may drop as well.

The next level in the food web is made up of consumers that eat phytoplankton. These microscopic zooplankton and larger “benthic” organisms (like water fleas and freshwater shrimp) are important because they can tell us a lot about the health of the aquatic environment. If zooplankton abundance goes down, then it can mean there may be water pollution or problems with their food source.

The 2018 State of the Bay ecosystem health report presents changes in the lower food web to help measure the overall aquatic health of Georgian Bay. Researchers collect samples of lake bottom sediment. The number and type of different organisms are important measures, so researchers sift through the mud to pick them out, count them, and weigh them. Sadly, decades of research have shown that species in the lower food web of Lake Huron have all been declining.

Phytoplankton levels significantly decreased in 2003 and 2008, possibly because of low nutrient levels in some offshore areas, invasions by zebra and quagga mussels filtering out nutrients, as well as warming water temperatures due to climate change.

Zooplankton have seen declines of up to 95% over the past 20 years. Although the reason behind this decline is unclear, nutrient availability, loss of phytoplankton, invasive species, and changes to fish populations have probably all had a hand. Climate change is also a threat to zooplankton, as warmer water can be harmful to some species.

Benthic organisms have also been declining since 1970. One species of freshwater shrimp, called Diporeia, is considered a major food source for small fish in Lake Huron-Georgian Bay. Their population began to decline in the late 1990’s – around the same time as the rapid increase of zebra and quagga mussels – and have collapsed completely today. As a result, in 2003, the alewife (a major prey fish) had collapsed, leading to starvation among larger species, such as Chinook salmon, whose population collapsed in 2005.

The State of the Bay report tells an important story about our environment. Nutrients are in major decline, and phytoplankton and zooplankton trends are following. Benthic invertebrates like Diporeia, once the most abundant benthic food source, are disappearing from the Great Lakes. What will be the effects on species higher in the food web? Are invasive species, combined with climate change, creating a biological desert on the bottom of Lake Huron and Georgian Bay? And can we be part of the solution to protect a healthy environment?

David Bywater is the State of the Bay Project Manager for the Georgian Bay Biosphere Reserve, a not-for-profit dedicated to environmental and community well-being. He can be reached at [email protected]

In 2014 and 2015, the Ministry of the Environment and Climate Change used divers to undertake benthic surveys in five areas on the eastern shores of Georgian Bay: Shawanaga Inlet, outer Parry Sound, Moon Island, Go Home Bay and Severn Sound/Honey Harbour. Biologists conducted the surveys at 47 sites, at depths of three to 18 metres, to collect information about lake-bed substrate, algae and invasive species.

Preliminary findings indicated that Lake Huron had fewer zebra and quagga mussels than Lakes Erie and Ontario, and the mussels were least abundant in Georgian Bay. In eastern Georgian Bay, the population of zebra and quagga mussels is relatively low, but with a wide distribution (ranging from fewer than 1,000 mussels per square metre to a maximum of around than 3,000 mussels per square metre). It is suspected that mussels cannot tolerate the low-alkalinity water (low calcium and low pH) running off the Canadian Shield.