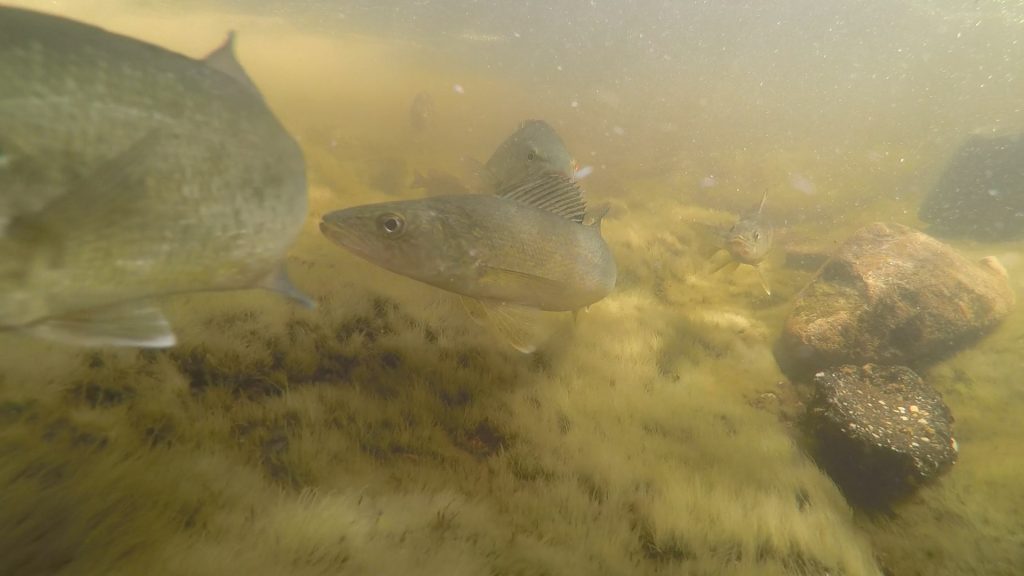 One of the best ways to study the state of Georgian Bay is to look at the fish community, and specifically whether each species of fish is naturally reproducing – or if the population is declining.

Fish are a useful indicator of aquatic ecosystem health because they reflect changes in nutrients, prey availability, water quality and habitat. Dozens of studies over decades, give us a snapshot of the health of fish in the Bay.

Historically, prey fish in Georgian Bay were quite diverse. In offshore waters, there was a mix of native prey fish such as the deepwater cisco (e.g., bloater, shortjaw, shortnose, Blackfin, Kiyi), sculpin, lake herring, ninespine stickleback and trout-perch.

In nearshore waters, species like the spottail shiner, emerald shiner, young whitefish, sucker species (e.g., common white sucker) and yellow perch were important in the diet of predators like walleye, pike and muskie. Native prey was in balance with native predators.

Over time, with over-harvest of some species, introductions of new fish, stocking for anglers, and the profound changes brought by invasive species, that system fell out of balance. Zebra and quagga mussels have reduced nutrients, and in turn the availability of food at every level of the food web.

The only substantial native prey species remaining in offshore waters is the deepwater cisco species, known as the bloater. Rainbow smelt and up until recently alewife, both non-native species, have been prominent offshore prey fish since the 1930s. Overall, prey fish diversity and abundance have declined, creating a food web imbalance where there is less food energy in the system for predators.

These changes in offshore food webs have affected species like lake trout and lake whitefish. Both species were harvested by large commercial fisheries historically in parts of eastern Georgian Bay. The rehabilitation of lake trout in Parry Sound was a major success story but restoration of lake trout elsewhere is still not completed. After reaching historic highs in the late 1990s, whitefish abundance has declined substantially, the causes of which are still being investigated.

In eastern Georgian Bay, smallmouth bass are one of the more abundant species, yet they too are affected by human activities, including harvesting and habitat disturbances. Warming temperatures have improved growth and survival but changing water levels and new invasive species like round goby, readily consumed by bass but also an effective predator on bass eggs and fry, make it difficult to predict future abundance.

The northern pike and muskellunge are top predators that live in nearshore waters and secluded bays. They are reliant on coastal wetlands for successful spawning and nursery habitat and return to the same spawning location each year – so they are sensitive to environmental changes and especially loss of wetlands. 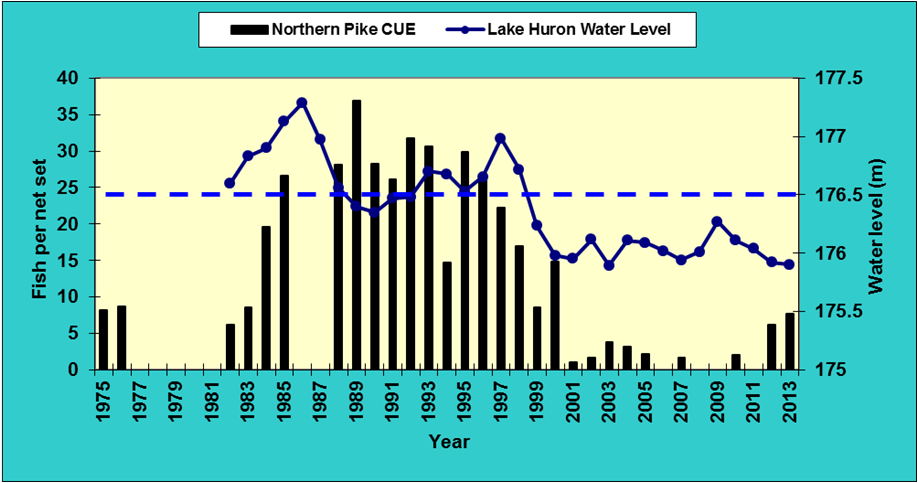 Research shows that most pike and muskie populations in eastern Georgian Bay and the North Channel appear to be unchanging, indicating a naturally reproducing, sustainable population. But populations in southern Georgian Bay may be deteriorating. Further studies will be needed to determine each of these trends. If these species are to remain self-sustaining, then preserving coastal wetlands is a priority.

At one time, walleye were plentiful and Georgian Bay became known for the size of its fish. However, since the early 1900s, most walleye stocks have declined due to overexploitation, human alteration of rivers and waterways and the introduction of invasive species. Dams in rivers change the flow of water, and high water can threaten eggs by washing them away, while low water can cause them to dry out. In the Moon River, for example, where walleye spawning runs used to number over 30,000 fish, these numbers have dropped more recently to only several hundred.

Declines in all major native species—lake trout, walleye, muskellunge, pike and others—indicate that the aquatic system has changed significantly in the past few decades. Despite restocking efforts and some habitat restoration work, the years of stress from invasive species, habitat loss and now loss of nutrients create an enormous challenge for sustaining fish populations.

David Bywater is the State of the Bay Project Manager for the Georgian Bay Biosphere Reserve, a not-for-profit dedicated to environmental and community well-being. He can be reached at [email protected]

Shawanaga First Nation is taking care of the land with traditional harvests, particularly in our careful monitoring of the walleye population on the Shawanaga River. Since the 1970s, monitoring of the fish harvest, as well as guidelines agreed to by community members, have ensured that only enough fish are taken to sustain each family and for cultural ceremonies.
We have continued with this practice for the last 40 years. Our First Nation has employed 8 to 10 community members each year to assist with the monitoring, which takes place 24 hours a day during peak harvest season. This includes: data collection, species protection, and traditional harvesting for the Elders, community members in need and our various ceremonies held throughout the year.

In 2002, Shawanaga First Nation decided to start a walleye fish hatchery to help offset the tremendous pressure on the walleye population from all resource users, including the traditional harvest, commercial fishing, and sport fishing.

The goal of the Shawanaga First Nation Fish Hatchery is to ensure the sustainability of the walleye species – not only for our community, but also for all people of generations to come. This is done by collecting and fertilizing 85-90% of all eggs from the fish harvested, mixing the genetic stock, and by teaching the younger people traditional practices, which includes conservation teachings, such as releasing mature females to let them reproduce.

The community abides by strict limits (three fish per day, per household). Some years, the First Nation decides to put a moratorium on fishing among its members to protect the walleye population. Staff on the river can help us to ensure that Shawanaga First Nation continues to practice conservation for future generations, in accordance with both our Inherent and our Treaty Rights.

Annually, we have successfully raised and released an average 1.5 million fry back into the Shawanaga River system, with a high of 5 million in 2012. In addition, there are high numbers of eggs fertilized and returned directly to the spawning bed.

Reports from both the Ontario Ministry of Natural Resources and Forestry (MNRF) and the Eastern Georgian Bay Stewardship Council have shown that the conservation practices of the First Nation are having a measurable and positive effect on the walleye population.

We believe that walleye in Georgian Bay need this level of care and that populations will continue to grow with our increased efforts. This is a direct reflection of the stance of the First Nation, that reciprocity is the foundation of our leadership in land and resource management because we are the keepers of the land.

With our good conservation techniques and traditional harvesting practices, while still allowing the river to be a thriving fishery for people from all walks of life, we will need the help of all people to ensure that this population continues to stand out in Lake Huron as one of the most healthy and sustainable stocks.

From egg to adult, fish require different habitats throughout their lives. What is considered good habitat for a larval fish may not be ideal for a spawning adult of the same species. The Eastern Georgian Bay Stewardship Council undertook a project in 2015 with the goal of assessing whether there is sufficient accessible fish habitat to support walleye, lake sturgeon and sucker species in seven rivers of eastern Georgian Bay. They included the Seguin, Shebeshekong, Shawanaga, Naiscoot, Magnetawan, Key and Pickerel Rivers, as well as Sucker Creek in Pointe au Baril.

In order to assess the habitat required by these species during different stages of their lives (such as spawning, nursery, rearing and foraging), the staff conducted fieldwork at spawning beds in the spring and downstream habitat in the summer and fall. Fieldwork involved a number of techniques: aerial photographs of the river using a drone; counting eggs deposited on egg mats; measuring flow, depth and basic water chemistry at spawning beds; conducting night-spawning surveys; taking underwater video; using sonar and side-scan technologies; and snorkelling.

Based on the assessment, done in 2016, restoration was recommended on the Shebeshekong River to improve fish passage to good walleye and sucker spawning habitat. With help from Biotactic Inc., Wasauksing First Nation, local landowners, Carling Township and community volunteers, the restoration work was completed in fall 2017. The Eastern Georgian Bay Stewardship Council, with its partners, will continue to monitor the Shebeshekong River in future years to determine whether the restoration has been successful or if further enhancement is needed. Visit georgianbaystewardship.ca to learn more.

Based in Owen Sound, this unit of the Ministry of Natural Resources and Forestry oversees fishery management and assessment programs on Lake Huron and Georgian Bay. The biologists and managers seek to involve the broader community in achieving the goals of conserving Ontario’s biodiversity and ecosystem health. They work closely with U.S. State and Federal agencies, stakeholders, and other partners. The Upper Great Lakes Management Unit has been a critical partner on the State of the Bay project, providing data from fish index netting and recommendations from management plans. Resources are needed for research agencies like this one to provide effective ecosystem monitoring on a long-term basis.