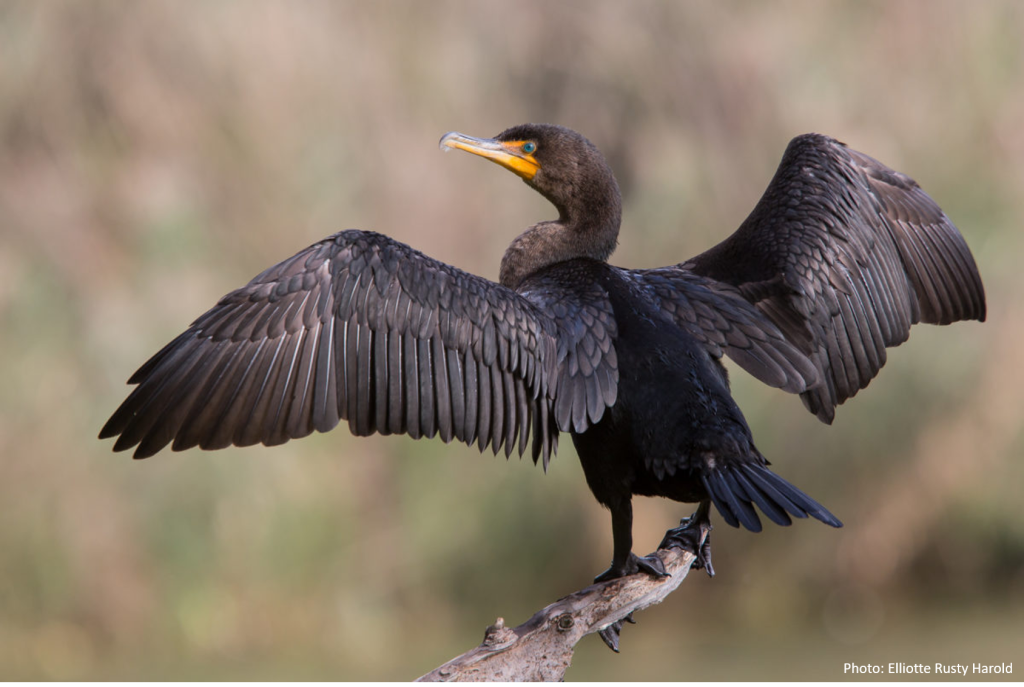 On July 31, 2020, the Ontario Ministry of Natural Resources and Forestry announced the opening of a Cormorant hunting season. After the period of public consultation, changes were made to the proposed Cormorant hunt. The Cormorant hunt will open on September 15 (instead of the proposed March 15) and run until December 31. As well, the maximum kill limit was reduced from the proposed 50 Cormorants per day to 15.

One of the most efficient marine predators is found right here in the Georgian Bay Biosphere region, as well as in lakes and waterways across Ontario. This animal has eyes perfectly developed for seeing its prey underwater. Unlike our human eyes, which have inflexible lenses that simply cannot change shape well enough to make a sharp image underwater, this animal has lenses allowing it to see things underwater just as well as it can see in the air. This animal has evolved body structures that allow it to dive deeper and swim better than other members of its kind.

What is this incredible animal? Is it a tern? A snapping turtle? Maybe an otter? It is the Double-crested Cormorant!

The story of Cormorants in Ontario

Cormorants are not considered an invasive species. Ontario’s oldest record of Cormorants comes from 1798 at Lake of the Woods, though it is probable that Cormorants were in Ontario before that first official ornithological record. In the late 1800s and early 1900s there were several more official records of Cormorants in Ontario, including in the Georgian Bay region. Since then, their populations have declined and increased over decades (see timeline), with populations now considered to be stable or increasing. In some parts of the province, however, large populations of Cormorants are causing concern. In 2019, the Ministry of Natural Resources and Forestry (MNRF) proposed a Cormorant hunt as a tool to manage Cormorant populations. Their decision is currently pending.

In some parts of the province, some people feel the species is doing a little too well, which has prompted questions of whether these booming populations need to be controlled. Cormorants nest in colonies, and large, dense colonies may put pressure on local ecosystems. More research would help determine how Cormorants are affecting ecosystems, so this blog post uses information and research available at the time of writing.

How would a Cormorant hunt work?

The main reason for the hunt appears to stem from a desire to protect certain fish species. Cormorants eat a variety of fish, both native and non-native. Their consumption of native yellow perch and smallmouth bass has commercial and recreational fishing groups concerned about a decline of those species. However, Cormorants are also a key predator of non-native and invasive species, such as the alewife and round goby.

The MNRF proposed to make the Cormorant a game bird, meaning hunting the birds would be allowed. Since Cormorants nest so close to the water, the MNRF would also allow hunting the birds from a boat. The proposed hunting season would open March 15th and continue through the spring, summer, and fall until December 31st. The proposed limit is a maximum of 50 Cormorants per person, per day. Details about the government’s proposal are available at: https://ero.ontario.ca/notice/013-4124.

Many people who supported the proposed hunt hoped that limiting the Cormorant population would reduce competition for sport fish such as perch and bass. This could boost commercial and sport fishing industries. Other potential benefits of a Cormorant hunt include improving tree health in dense Cormorant colonies (where the birds’ acidic guano can damage vegetation) and allowing more nesting opportunities for other colony-nesters such as herons and egrets.

Concern was also raised about the safety of the proposed Cormorant hunt, which would allow people to hunt from a boat. Cormorants typically fly low over the water and frequently inhabit the same waterbodies that people enjoy for recreation (swimming, paddling, etc.). Additionally, the proposed hunting season would coincide with the warmer months, when many people would like to be on the water. Some people also questioned the 50-bird kill limit, which is higher than any other game bird in the Province. For example, on their website, the not-for-profit Georgian Bay Association stated that “[the] proposal appears to be inconsistent with established, responsible hunting practices as described in the Ontario Federation of Anglers and Hunters mission, vision, conservation pledge and core values.” Additionally, Cormorants are not typically eaten (a search for “Cormorant recipes” produces few options), so hunters would not have much use for the Cormorants they shoot.

Lastly, some people felt uncertain about the proposed Cormorant hunt because they felt it was based on very little scientific research. Existing research cannot predict whether a decline in the Cormorant population would improve recreational and commercial fish populations. It is also unknown whether decreasing the Cormorant population would release populations of invasive species like the round goby, which Cormorants frequently eat. The round goby eats the eggs of popular sport fish (including trout, perch, and pike), meaning that eliminating Cormorants may not reverse the declines to many native fish species.

Although the MNRF’s period for public consultation has ended, the Province has not yet made a decision. It is not an easy decision to make, especially when there are still many gaps in our knowledge of how strongly Cormorant populations are tied to the populations of other species. Should the MNRF decide that Cormorant populations should be managed, there is still debate over whether a hunt is a better option than non-lethal methods of control (such as egg oiling or removing nests). If hunting is the selected method of control, there are still questions surrounding lowering the kill limit or dividing the hunting season into a spring and fall hunt (much like the waterfowl hunting season). Alternatively, the hunt could be allowed in restricted areas, such as the areas where Cormorant colonies are bigger. For example, there are large Cormorant colonies along Lake Erie and Lake Simcoe; however, most Cormorant colonies within the Georgian Bay Biosphere tend to be smaller.

One aspect that seems to be agreed upon by many is that more information about Cormorants would help in making decisions surrounding the proposed hunt. This is an important point. Currently there is little information on how Cormorants are affecting the ecosystem and how much (if at all) they are influencing declines in fish populations. As is the case with most things in nature, there are multiple factors that influence fish populations and the ecology of Ontario’s waterbodies. In the process of gathering more information and developing management plans for Cormorants, we should be including Indigenous Knowledge. Indigenous peoples have been caretakers of our land for a long time and have valuable experience that should not be left out of Ontario’s Cormorant management strategy. Cormorants are a complex species and so it follows that managing their populations will probably also require complex strategies and monitoring.

Weseloh, D.V. and B. Collier (1995). The rise of the Double-crested Cormorant on the Great Lakes: WINNING THE WAR AGAINST CONTAMINANTS. Environment Canada Fact Sheet. https://ontarionature.org/wp-content/uploads/2016/07/En40-222-2-1995E.pdf

Wires, L.R. and F.J. Cuthbert (2006). Historic Populations of the Double-crested Cormorant (Phalacrocorax auritus): Implications for Conservation and Management in the 21st Century. cowa. 29(1):9–37.

Kayla Martin is joining the Georgian Bay Biosphere this year as an Interpretive Guide. She is a recent grad of the University of Guelph’s Ecology program and is excited to share her enthusiasm for wildlife and landscapes in the Biosphere. She hopes to accomplish this by combining her artistic hobbies with her knowledge of ecology.