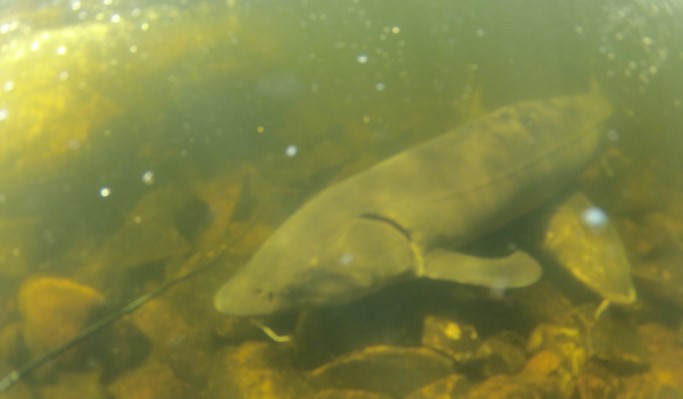 If you have been lucky enough to see a lake sturgeon in the flesh, you have had the privilege of laying eyes on Ontario’s largest and longest-lived freshwater fish. These gentle giants were once abundant in the Great Lakes. Today, their populations are only a fraction of what they used to be. In fact, the Great Lakes-Upper St. Lawrence populations have been declared “Threatened” by the Committee on the Status of Endangered Species in Canada (COSEWIC).

This month we turn our attention to lake sturgeon: how and where they live and what caused their decline. This is the first of a series on lake sturgeon, the giants of the Great Lakes!

Sturgeon (Acipenseridae) are the largest freshwater fishes in the world. Of the 23 sturgeon species worldwide, one is found here in Ontario – the lake sturgeon (Acipenser fulvescens). The lake sturgeon cannot be mistaken for any other species in Ontario. It has a triangular snout with four barbels on the underside. Its head is covered with bony plates and its body has five rows of bony scutes which disappear with age. The tail of a lake sturgeon is asymmetric. Young are grey or brown with scattered black blotches which disappear as the fish grows. Adults are grey or olive brown on the back, sides, and fins, and white on the belly.

In the Great Lakes watershed, adult lake sturgeon are typically found at depths of 5 to 20 metres in lakes or rivers with soft bottoms of mud, sand, or gravel. Come spring, spawning adults enter rivers and head upstream to spawning habitat, areas of relatively shallow, fast-flowing water (usually below waterfalls, rapids, or dams) with gravel and boulder substrate. Some populations have been recorded to travel 200-400 kilometres upstream to reach their spawning habitat!

Spawning generally takes place when water temperatures are between 13-21°C. Several males will fertilize eggs released by a female over the preferred substrate. The eggs stick to the rocks and hatch after 1 to 2 weeks, depending on water temperature. Larval lake sturgeon drift downstream from their spawning grounds at night. Lake sturgeon in the first year of their life typically remain in the river they were born, or at least near the river mouth, commonly associated with areas of shallow water, low current, and sand substrate. Juveniles eventually move to shallow waters of the Great Lakes where they feed opportunistically on virtually any organism living on the bottom.

A threatened species: how did we get here?

If lake sturgeon were historically abundant in all of the Great Lakes, how did we get here? The story of how this species, which dates back to the time of the dinosaurs (over 200 million years ago!), came to be endangered is not a simple one. While lake sturgeon have long been valued by many First Nations, prior to the mid 1800s, commercial fishers considered them a nuisance for tearing their nets, as they were targeting other fish species like lake whitefish and lake trout.

At that time, sturgeon meat had little value on the market so captured fish were disposed of, left to spoil, or even used as fuel for steamboats. By mid-century, however, people began discovering profitable uses for lake sturgeon meat, eggs, and swim bladders, sending demand skyrocketing. In 1880, 3.4 million kilograms of sturgeon were harvested from the Ontario waters of the Great Lakes. By the turn of the 20th century, lake sturgeon harvest declined to commercially insignificant levels owing to steep population declines. Until 2009, small commercial sturgeon fisheries still existed in the Ontario waters of southern Lake Huron and the North Channel in areas where adult and juvenile habitat is abundant. The following year the province of Ontario also closed the sport fishery within the waters inhabited by the Great Lakes-Upper St. Lawrence River population.

On top of all of these stressors, the biological characteristics of lake sturgeon make them even more vulnerable. The species grows slowly, matures late, spawns only periodically, and exhibits spawning site fidelity.

Due to this combination of stressors and biological characteristics, high adult mortality (i.e., through overfishing) has a big impact on lake sturgeon population recovery. As evidence of this, most of the populations that were overexploited in the late 1800s and early 1900s still have not recovered!

Next month we will look at some of the actions being taken to learn more about lake sturgeon in the Great Lakes and aid in the species’ recovery!