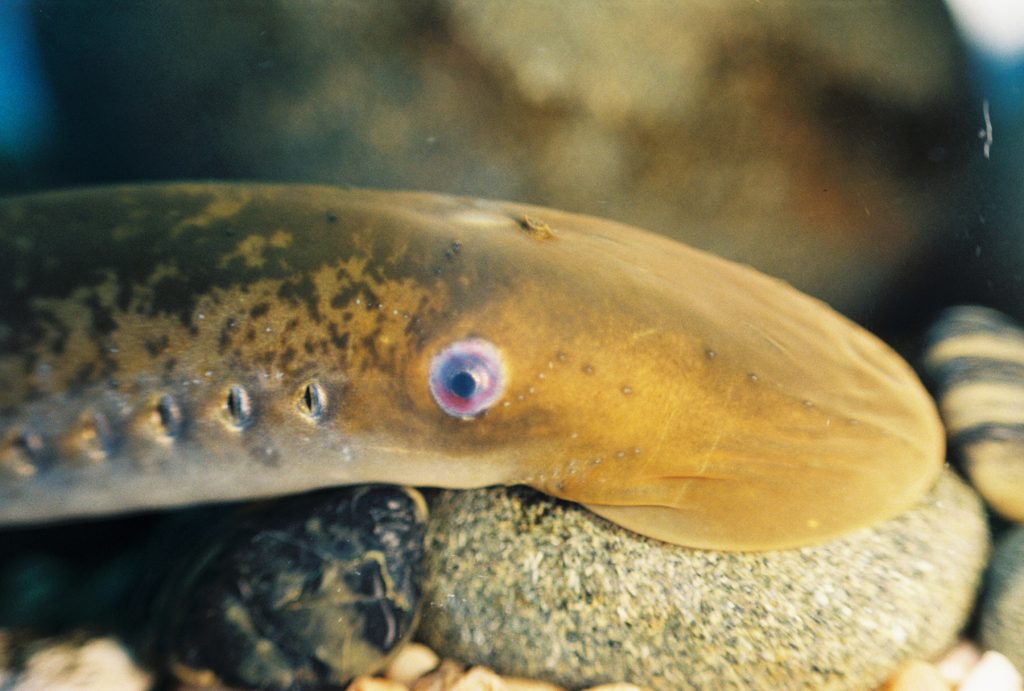 In 1919, improvements were made to the Welland Canal, a waterway that connects Lake Erie and Lake Ontario. The improvements widened the canal and allowed large ships to travel between the two; a feat that until then had been made impossible by Niagara Falls. With an effective connection between Lake Ontario and the rest of the Great Lakes, commerce boomed.

But there was a problem.

An invader was able to move through the canal from Lake Ontario, where it had arrived in the 1830s, to the rest of the Great Lakes System. Within a few short decades this invader decimated fish populations, hobbled the Great Lakes Fishery, and lead to one of the largest invasive species control efforts North America has ever seen.

This is the legacy of the sea lamprey in the Great Lakes.

Sea lamprey are a parasitic, invasive species that entered the Great Lakes System via shipping canals. In the species’ native range of the Atlantic Ocean, sea lamprey prey upon large, bottom dwelling ocean fish without causing much harm. A jawless fish that’s remained unchanged for 320 million years, sea lamprey feed by attaching to a fish with their suction mouth, and digging in their teeth to gain purchase. They then use their rough tongue to cut through the fish’s scales, feeding on its body fluids like a leech. Once the lamprey has eaten its fill, it detaches and swims away.

In the Atlantic Ocean, the sea lamprey’s prey species evolved alongside them and thus aren’t usually killed by their bites. Once sea lamprey entered the Great Lakes, however, the fish species that they targeted – large fish such as lake trout, salmon, and whitefish – weren’t large enough to withstand sea lamprey feeding. Fish populations were decimated, with a single lamprey able to kill up to 40 pounds of fish during its feeding period of 12 to 18 months.

When the Welland Canal was refurbished in 1919, sea lamprey were able to quickly move into the rest of the Great Lakes. They were found in Lake Erie in 1921, Lake Michigan in 1936, Lake Huron in 1937, and Lake Superior in 1938. Sea lamprey were rampant throughout the next decades, with populations of large Great Lakes fish collapsing and commercial, recreational, and subsistence fishing suffering. Things would likely have continued in this direction if the Great Lakes Fishery Commission had not been established in the 1950s.

The Commission introduced rigorous sea lamprey control methods that have managed to reduce populations by up to 90 percent, and in partnership with better management practices, fish populations have (in some areas) managed to rebound. The Parry Sound lake trout population in particular is an excellent example of how good fishery management and invasive species control can create a success story. Directly because of fishery management and sea lamprey control, the Parry Sound lake trout population is the only self-sustaining population outside of Lake Superior.

While the story of the sea lamprey invasion of the Great Lakes is an example of effective management, it’s not perfect, and it’s not history; sea lamprey controls only began once fish populations were in a sharp decline, and these controls will likely never stop. Methods such as barriers, traps, and chemicals called lampricides, which kill sea lamprey in their larval state while not harming the rest of the environment, are ongoing management practices. The knowledge here is clear: fish populations wouldn’t have been decimated if sea lamprey had never been able to invade, and if we were to stop controlling their populations, sea lamprey would rebound and we would be flung back to the disastrous state of the Great Lakes during the 1940s and 50s.

The sea lamprey invasion of the Great Lakes has taught us many lessons about invasive aquatic species management, including the importance of prevention. With the lessons we know now, it’s more important than ever to be aware of the potential destruction invasive species can cause. Between early detection systems that let you report invasive species, and best practices for boating and handling exotic species near bodies of water, we can all do our part to prevent another historic invasion.