Eastern Georgian Bay is home to more than pine trees, lichens and fish—there are over 1,100 native plant and animal species in the region. The majority of these species have healthy populations, but some are experiencing significant declines. Loss of biodiversity reduces the natural environment’s resilience to disturbances, such as diseases and rising numbers of pests, and can alter food chains.

A species at risk is a plant or animal in danger of becoming extinct or disappearing regionally. Currently, 50 species are “at risk” in the Georgian Bay Biosphere, due to factors such as habitat loss, road mortality, competition from invasive species, harvesting, poaching and pollution. Road, housing and cottage development lead to more predators, such as raccoons and house cats, which can decimate turtle nests and songbirds.

Species face these threats on an ongoing basis, which is why it is important that people try to help them. By simply reporting species at risk sightings or participating in citizen science programs, individuals can help generate scientific information about the locations of specific species. This information helps target conservation efforts and reduce the impact of human development.

See the full list of species at risk at gbbr.ca

Georgian Bay’s reptiles face one of their biggest risks while crossing roads. Turtles mature slowly, reproduce few young that survive and are vulnerable to landscape change. Road development is a direct threat to species at risk, and mitigation efforts—such as fencing and culverts—are working. Research shows that our conservation measures matter for the survival of species at risk.

Reptiles such as the eastern foxsnake awake at their winter hibernation sites. Eastern foxsnakes tend to hibernate communally and typically choose fractured rocks, where they can get below the frost line. While their natural habitat lies along coastal Georgian Bay and can be found up to one kilometre inland, research shows that hibernation sites are only within 100 metres of the Georgian Bay shoreline.

Researchers from the University of Guelph identified several foxsnake hibernation sites from 2002 to 2004. In 2017, Biosphere staff and volunteers were able to confirm that foxsnakes still use most of these sites. Two of the snakes found during these surveys had passive integrated transponders, or “PIT tags,” that had been implanted at Killbear Provincial Park. These particular snakes visit the park in the summer but spend their winter on islands—one travels over 5 kilometres to return to its hibernation site!

The eastern foxsnake is only found along the eastern Georgian Bay shoreline and in isolated spots in the Lake Erie area, Michigan and Ohio. It is a globally rare species, and its survival will depend on areas such as the Georgian Bay Biosphere. The foxsnake is an excellent example of the importance of reporting species at risk sightings. Sightings in late April to mid-May, and again in late September, may indicate the location of a hibernation site.

Monarchs are on the move! The butterflies that flutter into Ontario, usually in early June, are the descendants of monarchs that began their seasonal journey in Mexico. It takes about a month for a monarch to develop from egg to adult, and there may be four to five different generations of monarchs in transit as the population makes its way north each year.

The monarchs that are born in Ontario in late summer somehow know to begin the trip south. It is these adults that will not only migrate from points across eastern North America to the Monarch Butterfly Biosphere Reserve in Mexico but survive winter there, as well.

Monarch butterflies are at risk for a variety of reasons, with the main threats being logging at their winter roosts in Mexico; large-scale agriculture, which destroys their habitat; changes in weather patterns due to climate change; and destruction of milkweed plants, which many people consider to be weeds.

Planting milkweed with your neighbours provides plants in which female monarchs lay eggs. Watch the caterpillars eat the milkweed, making their bodies slightly toxic to predators. Witness the incredible metamorphosis of the chrysalis. And do remember to report your monarch sightings to the Journey North program, which tracks monarchs every year as they move across North America. This information is very important for monitoring changes in the monarch’s timing and migration routes.

Record your monarch sightings at learner.org/jnorth/

Bat species are beginning their hibernation or have already migrated. Of the eight bat species in Ontario, four are listed as endangered. Bats play a vital role in the ecosystem by controlling insect populations, but sadly, they are at risk from a fast-spreading disease.

The little brown bat has been hit hard by white-nose syndrome. Before 2006, this was the most abundant bat species across North America. With the loss of an estimated 7 million little brown bats and a birth rate of one pup a year, recovery will be an uphill battle for this species.

You can help by reporting sightings of flying bats in winter or bat deaths to the Canadian Wildlife Health Cooperative 1.866.673.4781. Seeing flying bats in winter is a strong sign of the presence of white-nose syndrome. Consider installing a bat house to provide a safe home for bats. More information is available at gbbr.ca.

In December, birders look forward to the Christmas Bird Count, an annual census that has taken place for 116 years. Each year, participants record the bird species and numbers of birds they see over a 24-hour period. This provides valuable information on winter bird population trends.

Almost 20 at-risk bird species find refuge in eastern Georgian Bay. Over the past decade, Parry Sound Nature Club members have consistently recorded bald eagles on their count day. This is an indicator that a once-endangered bird is making a strong comeback.

Other at-risk bird species spend their winter in warmer climates, typically Central and South America. Even in their absence, you can take actions to help them survive. For example, try to buy shade-grown, organic coffee and cocoa. By doing so, you’ll help protect overwintering habitat for many of our songbirds. Also, consider putting decals or other protective coatings on your windows to reduce collision deaths.

Other Ways to Help

We need to be aware of how our activities and behaviour affect our natural neighbourhood. As individuals and communities, we can take actions to help maintain and restore habitat. Caring for the health of our land and water is important for the well-being of wildlife, ourselves and future generations.

The Magnetawan First Nation (MFN) launched a species-at-risk program in partnership with biologists at Laurentian University in 2011. The program tries to understand at-risk populations, the rates of road mortality and the general movements of individuals and populations. The community has since produced one of the largest data sets about reptile road mortality in Canada. Community members participate in recording and reporting sightings of a variety of snakes and turtles, expanding the data collected through citizen science in combination with traditional ecological knowledge.

The data has been used to inform land-use planning, including the mitigation of provincial highway expansion, ecopassage design (that help wildlife to safely cross roadways), transmission-line locations and community economic development. The community strives to exceed the standards for species at risk protection itself using innovative new ways to develop in balance with nature. Program staff offer outreach in the community and surrounding areas, creating partnerships with numerous agencies and organizations. MFN trains construction contractors and public works staff on the identification of species and protocols under species at risk legislation. MFN also holds an annual conference about land and resource management to share the latest research and monitoring of mammals and fish. Magnetawan First Nation wants to be a model by understanding and respecting other species and protecting the land and water in their traditional territory. 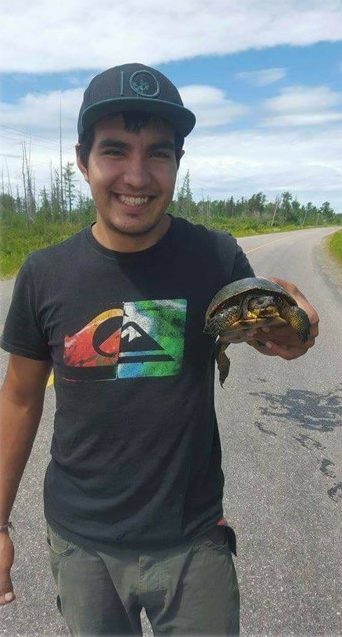