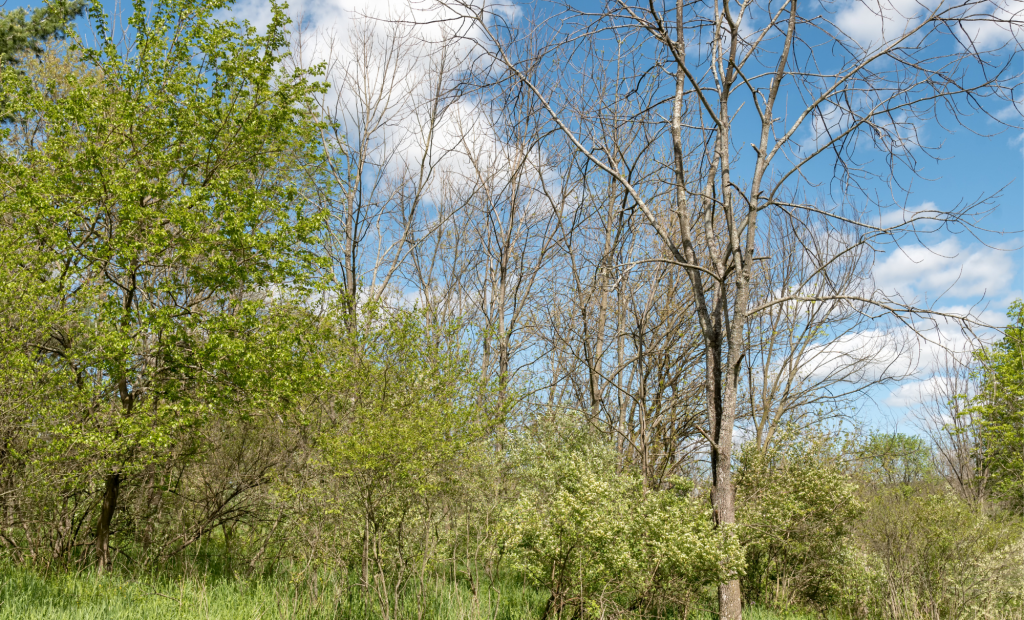 Canada is home to a unique variety of species, over 9,000 of which are species of beetles. The emerald ash borer (Agrilus planipennis) is an invasive beetle with a growing population in Ontario, including the Georgian Bay Biosphere region. Originating in Asia, this beetle likely made its way to North America in wood packaging or pallets. It was first detected in the Detroit, MI and Windsor, ON areas in 2002. In its natural habitat in Asia, emerald ash borer (EAB) populations are kept under control by predators, climate, and other natural limiting factors. In North America, this is not the case.

The emerald ash borer is named after the emerald colour of the adults and its tendency to bore (tunnel in and destroy) into ash trees. EAB feeds on, and creates habitat in, all species of North American ash (Fraxinus spp.), four of which are native to this region.

Adult EAB beetles can be identified by their iridescent metallic green colour. They have a flattened head with large black compound eyes on either side. Adult beetles are very small; typically no longer than half an inch long and one sixteenth of an inch wide. The larvae are a creamy-white colour, have 10 bell-shaped abdominal segments, and when fully mature are 26-32 mm long. You’re more likely to see signs of EAB presence in an area than the actual beetle or larva though.

There are a few ways to tell if an area has been infested with EAB. The most obvious sign of an infestation is a decline in foliage or dead leaves, typically starting with the crown of a tree. You may also see D-shaped exit holes 4-5mm wide or splits on the bark. If the bark is peeling away, you will see shallow S-shaped tunnels in the wood and a leftover sawdust residue called frass.

Female EAB beetles lay eggs in the bark crevices on ash trees in the spring or summer. The larvae hatch after 1-2 weeks and bore into the tree to feed and overwinter until the following March. When the larvae feed, they leave their meandering S-shaped tunnels under the bark. They pupate for 2-3 weeks in April until they become adult beetles and exit the tree. From there they live for 2-3 weeks during which time they breed and lay eggs before dying.

EAB larvae feed heavily on the part of the tree under the bark where nutrients flow, as a result, trees are unable to transport nutrients, and therefore quickly die. Infested trees tend to only live for 3-4 years and up to 99% of ash trees are killed within 8-10 years of EAB arriving in an area.

In 2015, Muskoka Conservancy launched an Emerald Ash Borer Early Detection Pilot Project. The 2018 project was funded by both the Town of Gravenhurst and the Town of Bracebridge with assistance from Bioforest. Captured beetles were analyzed and an EAB specimen was found in two locations: one near Gravenhurst and one in Bracebridge. In 2019, 27 beetles were found in the same Gravenhurst location as in 2018. An EAB beetle was also captured at another site near Gravenhurst. These results confirm the presence of EAB in Muskoka.

Killbear Provincial Park staff first discovered evidence of EAB in the park in the fall of 2019. From there, park staff took swift action to remove all ash trees that could fall on a road or campsite. Two campgrounds 3 km apart were the main clusters of infection. Around 7,000 trees were cut down in the spring of 2020. Many of these trees did not show signs of EAB but were cut pre-emptively for safety. There were about 70 campsites that were closed for the 2020 season as there were still ash trees that were not cut. This work was finished in October and November of 2020 and all the logs are being quarantined in the park.

Also in 2019, the presence of EAB was confirmed in Port Severn, Bala, Parry Island, and Parry Sound by the Ministry of Natural Resources and Forestry.

Due to EAB’s lack of limiting factors such as climate and predators, it is an ever-growing issue. Losing large numbers of ash trees can have serious environmental and economic impacts. For example, tree loss in cities can worsen the urban heat effect, meaning that cities get hotter and more money and energy is spent on air conditioning. Losing trees also means that habitat is lost for birds, squirrels, and other animals.

In the United States, scientists are experimenting with the effects of releasing EAB parasitoids into infested areas. These parasitoids occur naturally in northern Asia where they help control EAB populations. In one study, parasitoids were released in multiple northeastern states from 2015-2017. The study revealed that, on average, the population density of the beetles decreased by approximately 76% from 2015 to 2020. Similar studies in the past have also yielded successful results. All of these studies have shown that a timely introduction of parasitoids may decrease the populations of EAB enough for ash tree populations to recover.

What You Can Do to Prevent the Spread

Adult beetles can fly relatively short distances which allows for slow local spread. However, they can also land on cars and be transported further away, or be relocated when infested materials such as logs, lumber, pallets, and wood chips are moved.

There are simple ways you can help stop the spread of EAB. If you are burning wood, buy it or source it on site. Moving firewood even a few kilometers is a common way to spread these invasive pests. In fact, moving firewood from places with a known population of an invasive insect can rack you up a fine of up to $50,000 under the Plant Protection Act. Check all lumber, wood, trees, and wood chips for an infestation before you transport them. Don’t transport wood with any signs of EAB.

Any invasive species sightings can be reported to the Invading Species Hotline at 1-800-563-7711 or by visiting EDDMapS Ontario.

Not sure what kind of insect you’re looking at? Join GBB’s iNaturalist project and find out! iNaturalist can be downloaded as an app on your phone or device, or accessed via the website. To use iNaturalist, simply take a photo of what you are trying to identify and upload to iNaturalist to see what species identifications it suggests. If you aren’t sure what species you have, other users can see your observations and help you identify the species.

Eden Graves is a Species at Risk Technician and Heritage Guide with the Georgian Bay Biosphere. She grew up around Georgian Bay and has always had a strong connection with the Biosphere region. She is currently taking her undergrad in Environmental Engineering at the University of Guelph.