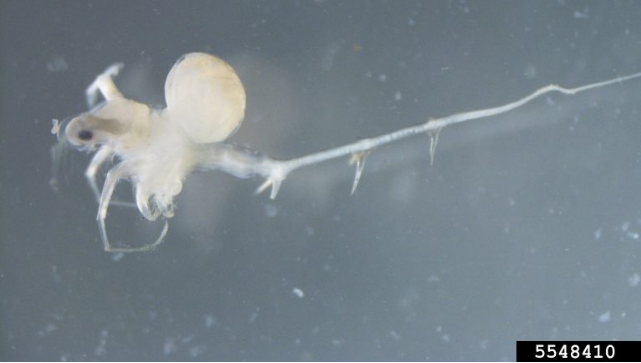 Georgian Bay is well known for producing trophy-sized fish, but the smaller inhabitants of the waters are often overlooked. Zooplankton are small aquatic animals that make up part of what is referred to as the lower food web of Georgian Bay. This month we take a closer look at one zooplankton in particular, the spiny water flea (Bythotrephes longimanus).

The spiny water flea is an invasive species of zooplankton found in Georgian Bay and other lakes in the region. Despite its name, the spiny water flea is not an insect. Rather, it is a cladoceran, which is a type of crustacean. The spiny water flea is native to Eurasia and was introduced to North America through the ballast water of cargo ships. The first reports of this invasive species were in Lake Ontario in 1982, the same year it was spotted in Georgian Bay. Today, this invader has also found its way into some inland lakes in the region on boats and recreational and fishing gear.

The spiny water flea prefers large, deep, clear bodies of water. They spend most of the day in deeper, cool water, and travel up the water column to the warmer surface to feed at night. They can live in water temperatures from 4°C to 30°C.

Individually, the spiny water flea is on average only about one centimeter long. These invaders are translucent and white with one small dark eye. They have four pairs of legs, two branched antennae used for swimming, a tail, and a balloon-like egg pouch on their back. A spiny water flea’s tail is approximately 70% of its total length and has one to four barbs (depending on age) with a pointed end. They have a habit of collecting in masses which look and feel like rubbery gelatin.

The spiny water flea has a unique method of rapid reproduction. In late spring, eggs resting in sediments hatch. When conditions such as food abundance and water temperature are ideal, female spiny water fleas will undergo parthenogenesis. In this asexual form of reproduction, a female can create up to ten eggs which hatch in as little as two weeks. The newly hatched eggs will be clones of the mother. The spiny water flea’s sex is not determined by genetics, like humans, but rather by environmental factors. Since males are not needed to reproduce during the summer months, they become uncommon. When the weather becomes colder and food supply becomes limited, males are produced. When the males hatch, sexual reproduction begins. Following sexual reproduction, females will create a protective structure called the ephippium which holds one to four fertilized resting eggs. The ephippium is shed and these eggs will sink and lie dormant for the winter or until conditions are favourable for hatching. The eggs will typically hatch in late spring.

While asexual reproduction (parthenogenesis) is a strategy most commonly found in invertebrates, it has been found to occur naturally in some snakes, fish, sharks, turkeys (although very rarely), and a few other animals. On multiple occasions, researchers have artificially induced mice into parthenogenesis.

An Invader in the Bay

The invasion of spiny water fleas has also had economic and recreational impacts. The invasive species’ effects on fish populations has meant that commercial and recreational angling capacity has declined. Not only are there fewer game fish to catch, but the spiny water fleas also tend to gather in masses on fishing lines, which can make reeling in line extremely difficult.

Unfortunately, there are no known ways to eliminate spiny water flea populations once they have arrived in an area. For now, the most important step is to prevent spreading the invasive species further between lakes. The spiny water flea is often spread through bilge water or on boats. Boat owners can prevent this by thoroughly cleaning their boat and trailer with high pressure (>250psi) or hot (50°C) water before transferring vessels between water bodies. Alternatively, boat owners can leave their boat in direct sunlight for a minimum of 5 days to allow the boat to dry and spiny water fleas to die. Water must also be drained from the boat’s bilge, live well, and motor and transom wells while on land.

If you spot a spiny water flea or other invasive species, please report it by calling the invading species hotline 1-800-563-7711 or visiting https://www.eddmaps.org/.