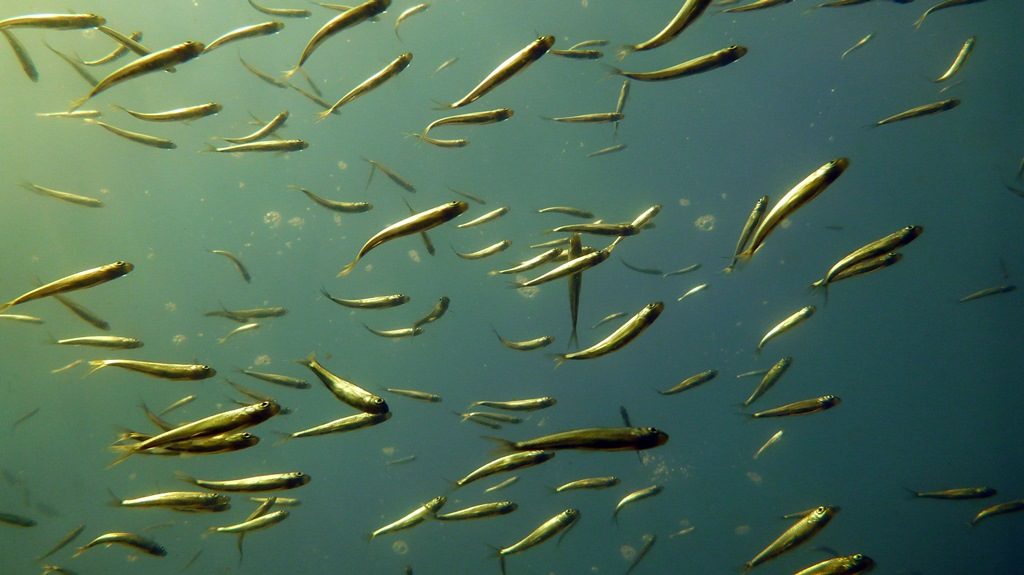 Georgian Bay and the surrounding inland lakes and rivers are full of wonderful surprises. Every summer we receive emails from residents and visitors with questions about the interesting things they see in the water. For this month’s blog post, we have compiled a list of some of the water wonders that we are most commonly asked about. Dive in to learn about neat freshwater finds from pollen to parasites!

Moss animals (phylum Bryozoa) are simple microscopic aquatic invertebrates that live in colonies. Individual bryozoans are called zooids and can be viewed with adequate magnification. Zooids feed on microscopic organisms like diatoms and in turn, are fed on by larger aquatic predators like fish, insect larvae, crayfish, and snails.

Freshwater bryozoan colonies build gelatinous exoskeletons (outer protective structures) that contain many individual zooids. Colonies can range in appearance from jelly-like masses (typically what is found in Georgian Bay) to intricate coral-like structures. Colonies usually attach to some form of structure such as submerged logs, docks, or rocks. They reach their largest size in late summer and fall, which is when most people notice them.

Moss animals are not very tolerant of pollution and as such, they usually indicate good water quality in the areas they are found.

How do you know if you are looking at a mass of frog eggs, salamander eggs, or a bryozoan colony? Frogs lay individual clear eggs with a visible embryo inside each egg. The individual eggs are grouped together to form a mass. Salamanders go one step further and coat the entire egg mass with an additional layer of jelly making it more difficult to see the individual eggs. Bryozoan colonies are firm and do not have embryos inside. Time of year can also be a helpful hint. Bryozoans die in the winter and form new colonies in the spring. If you see a large mass in the spring, it is likely frog or salamander eggs as bryozoan colonies will typically not be a noticeable size yet.

Foam can often be seen along shorelines or in open water areas on windy days. Contrary to popular belief, this foam is not the result of some pollutant in the water, it is a naturally occurring phenomenon. Foam occurs when oils from decomposing aquatic plants or animals float to the surface and reduce the surface tension of the water. With reduced surface tension, wind and wave action introduce air into the mix and bubbles are formed. Where these bubbles accumulate along windward shores, we see foam. Foam can appear white, brown, or somewhere in between depending on water colour and how much debris has built up in it. When disturbed, foam breaks apart easily. Natural foam is made up of 99% air and water and 1% surfactant, the substance that reduces water surface tension (i.e., oil from decomposing plants or animals).

Detergents and some chemicals can also cause the formation of foam. This foam will typically have a noticeable perfume smell (unlike the earthy or fishy smell of natural foam), feel slimy, and will tend to re-clump when disturbed.

Every spring and early summer, pine pollen, produced by male pine cones, is released and carried by the wind in search of a female pine cone to begin the process of seed germination. While pine pollen is produced every year, some years are particularly productive leaving surfaces, including water, covered in the powdery yellow substance. Pollen on the water’s surface can look like a paint slick or algae bloom. When pushed around by wind and waves, pollen can also form clumps or leave a film behind on rocks as water levels drop into the summer months. In time the pollen grains become waterlogged and sink to the bottom of the lake where they are preserved in sediment layers. Scientists who take sediment cores from lakes can look at pollen grains to determine what kinds of plants were growing in an area at the time the sediment was deposited. With this information, scientists can make inferences about the climate at that time and understand changes in vegetation going back thousands of years!

Often described as small, round, gelatinous globules, Holopedium are a native zooplankton in the Great Lakes. As adults they are omnivorous filter feeders that consume phytoplankton. They have a pea-size, jelly-like capsule called a mantle that surrounds most of the organism and greatly increases its size. Compared to other native zooplankton in the Great Lakes, they are considered large which is likely beneficial for avoiding predation. Holopedium migrate towards the surface of the water column around sunset and return to deeper water during daylight. As part of their lifecycle, Holopedium eventually leave their protective gelatinous mantle. Floating near the surface, mantles are blown toward shore where people are more likely to encounter them in the water or washed up on shore.

Research has shown an increase in Holopedium in lakes in the region with possible impacts on the aquatic food web and infrastructure. To learn more, visit: www.queensu.ca/gazette/stories/aquatic-osteoporosis-jellifying-lakes.

There are roughly 350 species of horsehair worms (phylum Nematomorpha), many of which occur in freshwater habitats such as streams and lakes, and all of which have fascinating life cycles.

Horsehair worms start out as gelatinous eggs attached to sticks or rocks in aquatic habitats. Once they hatch, the larvae remain on the bottom of the waterbody waiting to be eaten by a host. Not just any host will do though, horsehair worms need to be eaten by an insect that is in its aquatic life stage; not a fish or crayfish, etc. If eaten by an appropriate host (e.g., mayfly larva), the larva will burrow through the host’s digestive tract into its body and form a resting cyst. Eventually the host will enter its terrestrial life stage to reproduce, taking the horsehair worm cyst along for the ride. At this point the cyst needs its host to be eaten by a second host. Again, it requires a very specific kind of host, one that is particularly susceptible to a certain type of behavioural modification, this includes crickets, cockroaches, and beetles. If the cyst gets lucky and is eaten by a suitable host, it begins to co-opt the host’s resources and grows rapidly into a worm-like life stage. Once the horsehair worm reaches full size (most species range from 5-10 cm long), it releases neurotransmitters that tell the insect host to jump into water, something it would normally avoid at all costs. Once the host enters the water, the worm leaves the host’s body through a hole it pokes through the body wall. Remarkably, not all hosts will die following this bizarre event, some are even able to find their way back to land and actually go about their lives. Finally, horsehair worms mate in the water, lay millions of eggs, and die.

It is important to note that horsehair worms do not parasitize humans or other vertebrates, meaning they do not pose a threat to us.

If you have ever caught a bass, pike, walleye, or any other species with black raised spots, you have encountered black spot disease (Neascus). The spots are small cysts that appear on the fish’s skin, and in a heavily infested fish they can appear in the flesh as well.

In the cysts of fish with black spot disease are tiny larval worms called trematodes. When a fish-eating bird like a great blue heron eats an infected fish, the trematodes mature inside the bird’s digestive system. Once mature, the worms lay eggs that are subsequently passed by the bird into the water through their droppings. The eggs hatch in the water releasing microscopic organisms called miracidia. These organisms have roughly 24 hours to swim around and find a host, usually a snail, before they die. After maturing in the snail, the organism emerges from the snail as a tiny parasite called a cercariae. The parasite swims around looking for a fish to infect by burrowing into it. If it does not find a fish within a few hours, it will die. Successful parasites burrow through the skin of the fish and the fish reacts by encrusting the parasite in a black pigmented cyst. The parasite can survive for many years inside the fish, waiting for a fish-eating bird to come along and start the process over again.

While they are not appetizing to look at, the parasites are destroyed in the process of cooking fish and do not alter the taste of the flesh. The parasite is not capable of harming humans and even the fish are typically unaffected by their presence. Some people prefer to season or bread their fish so they do not have to see the black spots while eating it.

The waters of the Georgian Bay Biosphere region are teeming with awe inspiring forms of life. Help us learn more about the wonders around us by joining the Georgian Bay Biosphere iNaturalist project and sharing your observations! All species observations help us gather more information about the species on the eastern coast of Georgian Bay in order to better understand threats and where efforts into research and mitigation should be directed. These observations will help guide research questions, mitigation projects, and other conservation initiatives. As of September 2021, 850 individuals have submitted over 12,700 observations to the project!

iNaturalist shares your findings with scientific data repositories like the Global Biodiversity Information Facility to help scientists find and use your data. All you have to do is: